MHF set their sights on the next trekking challenge

After tackling the world’s highest mountain last year and raising a phenomenal $500,000 for brain cancer research, supporters of the Mark Hughes Foundation have set themselves another ambitious target – the Borneo Coast to Coast trek.

Led by former Newcastle Knights legend Paul “The Chief” Harragon and Mark Hughes himself, the group of 32 supporters will be tackling some tough environmental conditions as they follow in the footsteps of WWII Aussie POW’s on the Sandakan Death March.

“This will be an epic adventure not many have completed before, from one side of Borneo to the other” said Paul Harragon. “It’s sure to have its challenges but we are all very determined to get there and raise as much money as we can for MHF along the way. There are a wonderful group full of passionate people signed up so far, and with a few limited spots left I encourage anyone thinking about it to join us”.

“My favourite part will be walking where the soldiers before us have walked on the Sandakan Death March and retracing their steps. There could be times we will be up against it, but nothing is going to stop us”.

Following the success of the Beanie for Brain Cancer campaign where close to 200,000 beanies were sold raising an incredible $3.1 million for brain cancer research, the MHF team aren’t slowing down their fundraising efforts with today’s official launch of the Borneo Coast to Coast trek.

“Funds raised from the trek will support the next step in the MHF Strategic Research Program which is in alignment with the Australian Brain Cancer Mission. “ said Mark Hughes, founder of the Mark Hughes Foundation. “

“A major grant round will be opened from October this year to fund grants which showcase innovation, we want to fund big ideas that will take us closer to our aim of substantially increasing brain cancer survival rates.”

“We are thrilled to have nib and The Man Shake joining us as major sponsors on the trek again and continuing their ongoing partnership with MHF” Mark said.

The Mark Hughes Foundation has been formed to raise much needed funds for research, awareness and to support brain cancer patients and their families. Brain cancer is the biggest killer of children under 10 and adults under 40 years yet it is one of the most underfunded and under researched cancers of all time. 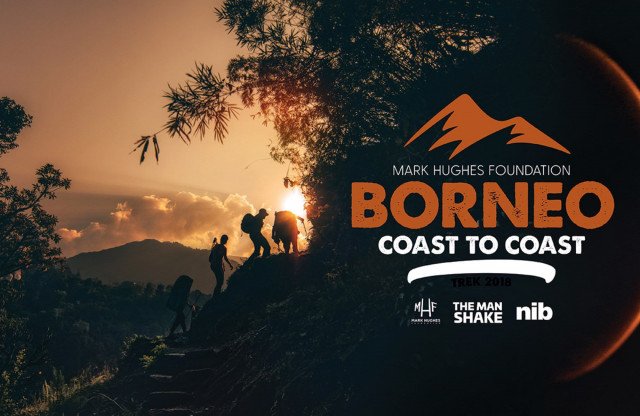