My Survival Journey… I was diagnosed with a brain tumour in 2018. Doctor Ross, my kind doctor, took a deep breath in and slowly out and sighed, unfortunately, you will need an MRI.

An MRI is like an X-ray but just for muscles and I had it on my brain. As I was casually on my way to the MRI, a thousand of scary doctors did a ton of tests on me. I wasn't comfortable at all. This was before the MRI started. After hundreds of tests, I finally had my scan. In the very loud machine. Then I heard the results... I was very nervous, there was a 4cm sized tumour in the back of my head, but they didn't know how long or why. All that they knew is that it was bad and it had to be removed, so I had to have a couple of surgeries. I was asleep though, so that was better but after the first surgery on my brain, I had to have a second one, then I had countless more on my body. I was devastated, but it had to be done. After the two surgeries on my brain, it felt like forever, but I was finally done.

I was now sent to a hospital bed in a room that felt like a prison cell for two whole months! I lost my ability to walk and talk so I made up a sign language to communicate things, like if I wanted something or if I was hungry or thirsty. Then I had to do radiation. This treatment was targeted on my brain and spine. I had to have this done 30 times. It was about 2 months, but it had felt like forever. I had a mask put on my face and was pinned down tightly onto a table, it was very scary. There were machines that spun around me and made loud beeping noises. Finally, I finished that horrible radiation! Sadly, I had some side effects. It caused swelling in my head.

Then I set off to continue my survival journey. First, I needed to go all the way to Sydney Children's Hospital, to have stem cells which is a type of blood cell and started what is chemotherapy. Chemotherapy was the type of treatment I got. When I started, I had a million injections that are called "cannulas" and the doctors would test my blood all the time. Otherwise, I was stuck in a hospital bed and couldn't move. Before my four painful months of chemo had started, I had an exciting 9th birthday party! I had such a fun but I was also a bit scared because I didn't know if I would be okay or not, but I stuck on a smile and continued to have fun with all my amazing friends!

I was captured in hospital for four whole months, over the four months I became underweight at 18kg. This was mainly because I had a gross taste in my throat all the time and didn't want to eat. One day, all my hair on my head and all my eyelashes fell out by chunk and hair by hair. I also couldn't walk or use my hands or fingers at all, for a long time, and even now I am still recovering. 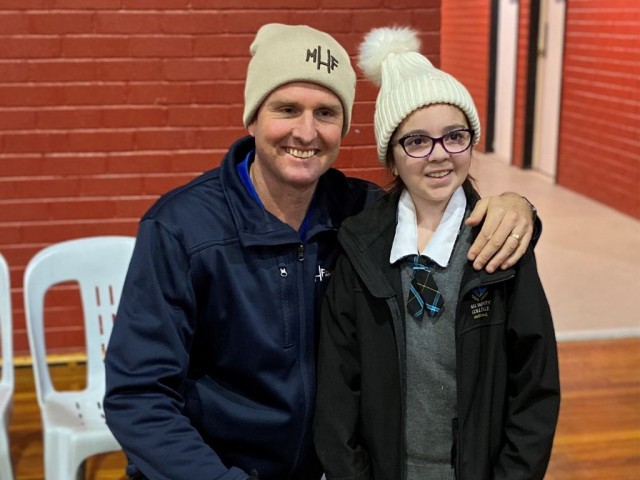 For the love of rugby league - Maddy Callander