My name is Sienna Newton, I'm 15 years old and year 9. I would like to share my story and experience with Brain Cancer so I can raise awareness on this cause.

In 2015, I was 8 years old and in year 2. Early on that year I had started to have tingling in my left eye and what is described as a left-hand seizure. On Friday the 15th of May I had an MRI on my brain just to make sure everything was alright. That day the doctors found my brain tumour and I was admitted into Westmead Children's hospital in Sydney the following day. I had surgery to remove my brain tumour on Tuesday the 19th of May. My neurosurgeon retrieved my tumour from the right frontal lobe of my brain and informed me that it was around the size of a plum.

I was quite lucky with my hair as they did not need to shave it all off. After the surgery I was left with a strip of hair missing which was where my scar was located and 4 titanium screws which you can actually feel in my head. I was discharged from hospital with the news that my tumour was benign which means it wasn't cancerous. However, 2 days later we were told at the oncology clinic that my tumour was cancerous. This day was quite traumatic for my family as we had no idea what the future would hold.

It was called an anaplastic ependymoma which was Stage 3 cancer. My only treatment option was radiotherapy as my tumour did not respond to chemotherapy. Whilst the radiotherapy can kill cancer cells, it can also kill healthy cells which meant that I could potentially have issues with my memory and learning. I had 33 treatments of radiotherapy at the Princess Mary oncology clinic at Westmead Hospital.

While I was undergoing treatment, I lived in Ronald McDonald house for 10 weeks and unfortunately had to attend hospital school, I was quite angry about this, and I didn't even think it was a thing, but it was. My sister Ebony came to hospital school with me but ended up ditching me just after 5 days because of how much she hated it.

Due to having radiotherapy I had lost half of my hair and I would often become very tired. After my treatment was completed, I was told that all my cancer cells had gone, and I would need to have MRI's every 3 months to ensure that my tumour would not come back. 3 monthly MRIs turned into 6 monthly, to 9 monthly and finally yearly. To this day I have had around 44 MRI's which will be 45 this September.

I am now a part of long term follow up for radiotherapy so they can monitor the after affects from the radiation I've had. Due to the trauma, I experienced I became very anxious, and I was diagnosed with medical induced trauma anxiety. Today I still suffer from anxiety, but I have a great team behind me that help me cope, manage, and develop strategies to help me deal with my anxiety. I have trouble with my cognitive thinking due to where my tumour was located which means it takes my brain longer to process things. I also suffer from short-term memory loss which means I don't really remember what I learnt in class a few days ago but I will remember it in about two weeks' time.

I have a weak left side of my body and I cannot feel my left hand anymore since I had a seizure in my left-hand prior to having my tumour removed. I'm very grateful for my family as they stayed by my side through all of it. Having Brain Cancer didn't only affect me, but it affected all the people that loved and cared for me as its heartbreaking especially for my parents seeing their child go through something so traumatic knowing that they can't do anything and having to make decisions no parent should ever have to make.

Only 2 out of 10 kids survive Brain Cancer past 5 years and I am very lucky as I reached 7 years cancer free just last month. I lost two very close friends from Brain Cancer while I was in hospital. They were only 5 and 8 years old. So, that's why it's important to raise awareness for this cause because that statistic of only 2 out of 10 kids survive Brain Cancer past 5 years needs to be raised so it can cause less devastation to all the people and families who are affected by Brain Cancer. I could go on forever about the importance of Beanies for Brain Cancer Day, but I can't. So, I would just like to thank everyone listening and allowing me to tell my story. 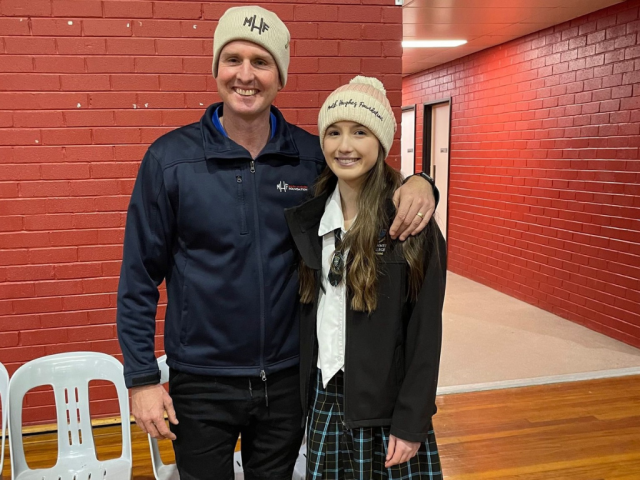