Christmas is meant to be such a wonderful time of year, not a time when you find out a loved one has cancer.

My boyfriend at the time, Jake and I were on a date night at an outdoor cinema in Burswood. Later that night after we drifted off to sleep, I was anxiously woken up by Jake hitting me in the back. He was having a seizure.

An ambulance was called, and he was taken to the local hospital. After many doctors, nurses, scans; it was the following day when those life changing words were said “it’s a brain tumour.”

At just 24 years old, he was diagnosed with brain cancer. We had been together for just over a year and never once was there any indication that anything serious was ever wrong. The surgeon explained to us how there was tumour the size of a fist pushing his whole brain to one side and that it needed to be removed immediately.

On Christmas Eve, he was then taken into surgery to remove as much of the tumour as they could. The surgery went well and in no time at all Jake was back on his feet.

He returned to university to study law and we picked up our little puppy Elzee, which we had initially had to delay because of his diagnosis.

Unless you were told, you could never tell Jake was sick. He never lost his big smile and continued to put everyone else first. I cannot remember a time when he let his prognosis stop him from living his life. Every time there was a setback with his health, he took it in his stride. His strength, courage and determination had me thinking he was going to challenge the devastating brain cancer odds.

Jake underwent two brain surgeries, numerous chemotherapy treatments, radiation sessions, and oncology appointments. The tumour would shrink right down and then months later, begin to grow back again. Each time, more aggressive than the last. In it’s final form, it returned as a Glioblastoma Multiforme: the most aggressive and dangerous type of brain cancer there is.

We had heard many life expectancy prognoses by this point, but we sure weren’t expecting to hear he had around 6-12 months left. He tried absolutely everything the doctors threw at him, but at the end of it all, there was nothing more they could do.

As someone who needs to be prepared, I searched the internet high and low to prepare myself as much as I could for Jake’s pending death. However, I could never find the answers I was after. Nothing could have prepared me for what was going to happen.

Within a matter of weeks, he began to get weaker and weaker. He was forced to defer from uni and simple activities such as talking the dog for a short walk were too much for him.

Soon after, Jake lost his ability to move the left-hand side of his body. Then he required a walking frame, then a wheelchair and later a hospital bed was put into his bedroom.

This is where he stayed for the remainder of his life, where he faced almost complete paralysation from his neck down.

From then on, he slipped into a coma and never woke again. As I sat by his bedside watching him tragically slip away, I knew I had to help fight this disease. I promised him I would.

In the early hours on Saturday, October 22, 2016, Jake peacefully passed away after battling brain cancer for just under three years. He was 27 years old.

I saw first hand how underfunded and under researched brain cancer really is. Brain cancer survival rates are extremely low and have hardly shifted in 30 years. I feel responsible to play my part in stopping this nightmare of a disease from becoming someone else reality. You can follow my journey through Instagram. 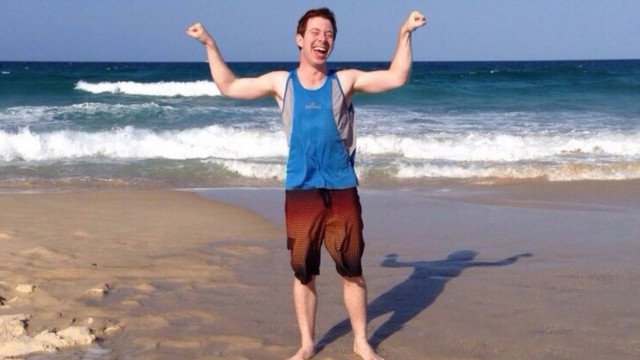