The Mark Hughes Foundation (MHF) along with Jennings Print Group, are proud to release a 2016 Inspirational Newcastle calendar for sale.

Just in time for Christmas as a perfect stocking filler, the calendar features pictures from local photographer Grant Sproule, showcasing the beautiful Newcastle and the Hunter Valley landscape. Inspirational quotes from Mark Hughes and other sources are also featured throughout the calendar, along with photos from the work MHF has been doing in the community.

“Since my diagnosis, I have found out first hand just how many people are affected by brain cancer” said Mark Hughes from the Mark Hughes Foundation.

“It is the biggest cancer killer of adults under 40 and children under 10, and we need answers. Through your support of purchasing a calendar for Christmas, it is a way to raise funds and help find a better outcome for patients and their families. Every dollar goes straight into Brain Cancer research at Hunter Medical Research Institute”

“With Christmas around the corner, we thought this is a great way for families to fill their stockings, while also supporting MHF at the same time. The calendar is only $10 with 100% of the proceeds going to MHF, and we can’t thank Jennings Print Group enough for producing the calendar and their on going support of MHF”.

The calendar is being officially launched at a fundraiser for MHF this Friday 13th November, at a Golf Day at Crowne Plaza Hunter Valley.

Mark was diagnosed with brain cancer in 2013. Following this, the Mark Hughes

Foundation (MHF) was formed to heighten awareness and raise much needed funds to promote research into this terrible disease.

Since the launch of the Foundation, MHF has managed to raise over $650,000 and isn’t slowing down.

In Australia, someone is diagnosed with brain cancer every five hours, yet we still know very little about the disease.

Calendars can be purchased in store at Newcastle Knights Supporter Store and Flanagans Menswear from Monday 16th November. 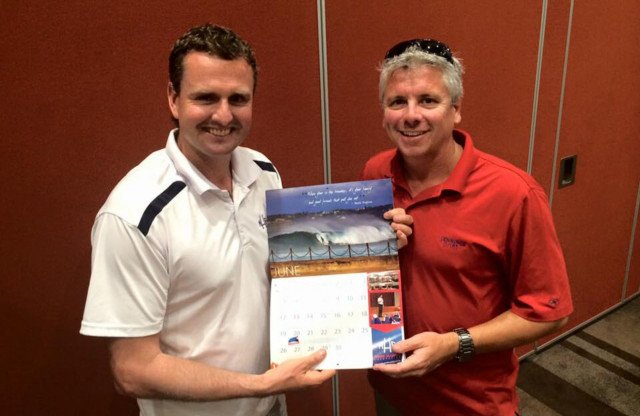